Terribly terribly late with this post and for that I am sorry! This is what I made for week 8 of the Great British Bake Off (and yes, I know we’re in week 9 / 10 now and I need to make some kind of patisseries, pronto!) which was all about advanced dough, or enriched dough, you know, the stuff that has butter, eggs and sugar in it and takes forever to prove? We said goodbye to Martha and Richard won star baker, again. Methinks he’s probably going to win now given this week’s decision! Now annoyingly the bakers made doughnuts as part of the showstoppers, but given I only made doughnuts the other week I had to think of something else…so here they are, my Chelsea buns! 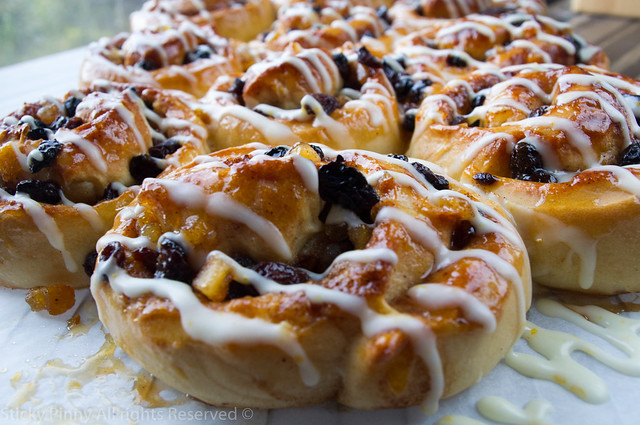 Buttery dough, wound around fruit and cinnamon, then glazed and iced. Sweet, sticky and soft. These fed us for breakfast for the whole week and now Catholic guilt is weighing on me (yeah, its the guilt that’s causing the scales to tip a bit…) but they were tasty. I put my own spin on the buns by adding orange zest and glazing with marmalade for a citrusy hit. There’s always a debate over iced or glazed Chelsea buns, but these take the pressure off which to go for, as they have both! 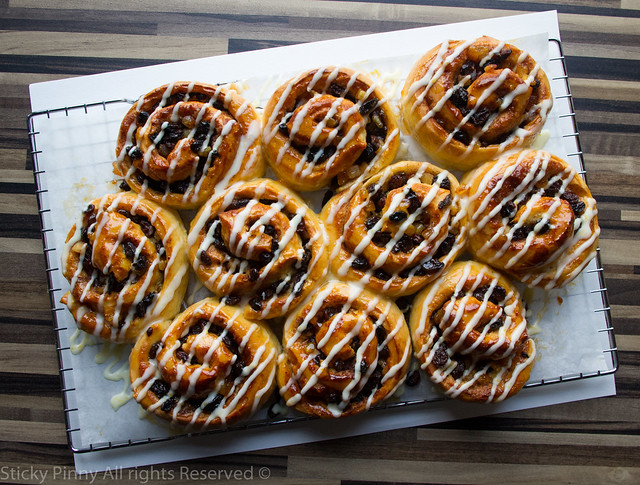 These will keep for a couple of days in an airtight tin – if they last that long! Go on, have a go at my lovely buns! 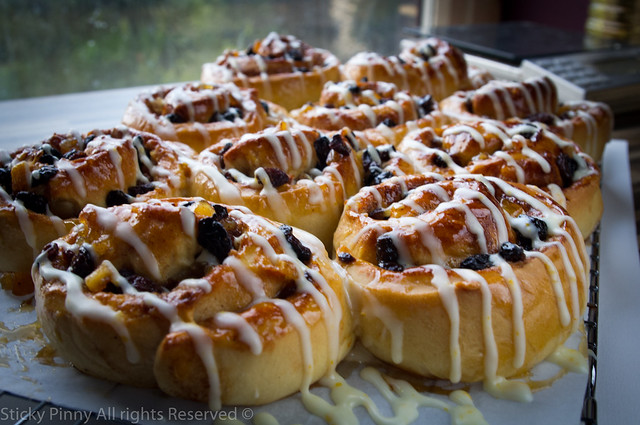 Put the milk and the butter into a saucepan and warm up until the butter is melted don’t boil, as it will kill the yeast.

Add the flour, yeast and salt into a large bowl. Pour in the milk and butter mixture and add the egg. Stir until it all comes together and then tip out onto your floured surface. Knead until it you get a smooth, elastic dough.

Lightly oil a bowl, pop the dough in and cover with cling film. Leave to prove until double in size. Whilst this is proving, cream together the butter and cinnamon.

Once the dough has doubled in size, roll out into a rectangle approximately 30cm x 20cm. Spread the cinnamon butter all over the rectangle evenly, then sprinkle over the dried fruits. Roll up the rectangle on the long side tightly so that it resembles a tight swiss roll, sausagey type thing. Make sure it’s as even as you can make it.

Cut the roll into about 10 even rounds, then place on parchment lined trays, with about 11/2 cm between them. Cover and leave to prove until double in size again.

Heat the oven to 190C. Once the buns are proved, bake for about 20-25 mins until golden brown, then set on a rack to cool, but still on the parchment (so that it’s easier to ice them).

Melt the marmalade in a small saucepan with a splash or two of water until smooth. Brush over the buns to glaze and allow to cool.

Mix together the icing sugar, orange zest and two tablespoons water. Drizzle the icing over the cooled buns and allow to set before serving.

Shove in your pie hole!! 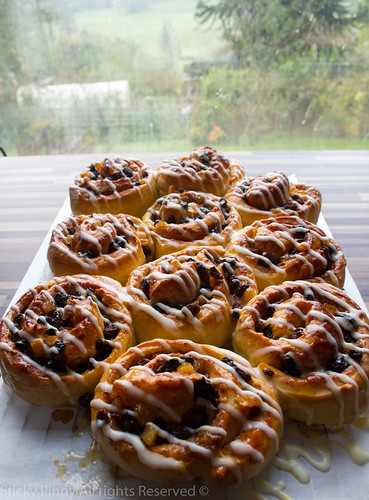